Health Benefits of Ginger: Nature’s Gift to All Maladies!

Ginger, which is consumed as delicacy, specie and even a medicine, is recognized by wonder specie, virtual medicine and many other names due to its numerous health benefits. Starting from tea to meal ginger is used in all, for taste as well as Health Benefits. Where on the one hand ginger is used to make species on the other hand it is even used as a food preservative.

Here is a list of Health Benefits of Ginger, the most commonly used kitchen species…

You may also like: Cinnamon Health Benefits for Your Well-Being

Chromium, zinc and magnesium along with vitamins and minerals present in ginger helps in improving as well as restoring blood circulation. Consuming ginger also reduces the risk of heart attacks as well as strokes, as the spice is known to prevent fat deposition in the arteries.

Helps Dealing With Pain and Inflammation

Ginger contains highly effective anti-inflammatory substances as well as painkillers thus, it is considered as an effective home remedy for inflammation and pain.

Benefits of Ginger is effective in healing with some of the common respiratory problems, such as cough as it is natural expectorant. It helps in loosen up phlegm and expanding lungs aiding in the quick recovery of the patient from breathing issues. 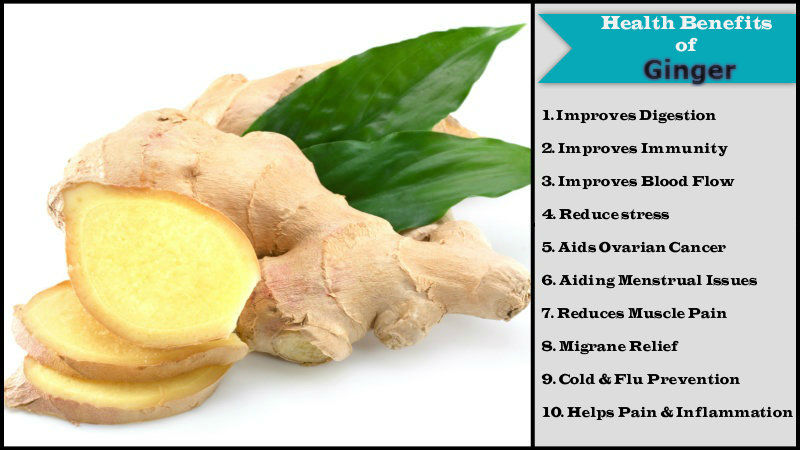 Due to the presence of many healing properties ginger is said to lower stress and tension. Gulping a cup of ginger tea could make you feel good and relaxed.

As ginger is an effective pain relief thus consuming ginger helps in relaxing the muscles and relieving menstrual pain. A cup of ginger tea with added honey works well in soothing menstrual cramps.

Ginger is also said to help in dealing with muscle pain caused as a result of exercising.

Here You Get Ginger Benefits: The Magical Herb!!

With all the great benefits at hand, you can never go wrong with ginger. Ginger has been a star root, and also known as magical herb, used as a spice and medicine. So, Boost your immune system with Ginger Health Benefits.

Get more update of Ginger Benefits from Food